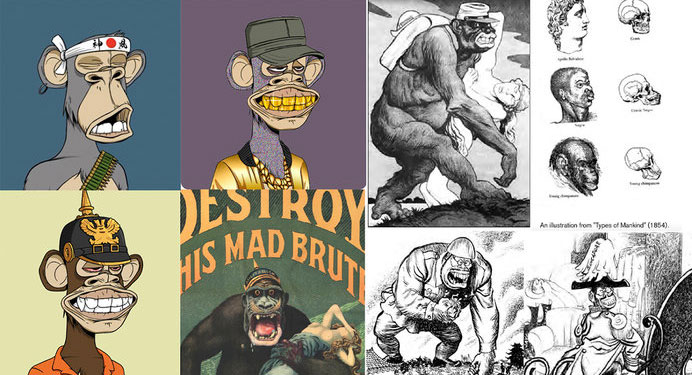 Bored Ape Yacht Club (BAYC) is a series of 10,000 anthropomorphized ape cartoons sold as NFTs. Since the project's launch in April 2021 the value has amassed to over $5B USD, and spawned many similar projects. The apes have various clothing and other traits, most traits are racially oriented or involve some type of military history. The act of disparaging someone by comparing them to an ape/monkey goes back hundreds of years. There is a word for it, “simianization.” There are many examples throughout history, its purpose is to justify violence and racism against another group by dehumanizing them, comparing them to apes. Simianization has occured with various ethnic groups such as Jewish, Irish and Asian people, but it is most predominantly used as a tactic against Black people. You might think simianization is something of a past era, but racists are still comparing Black people to monkeys today, such as the trend in Europe of throwing bananas at Black soccer players. At first glance, the apes in Bored Ape Yacht Club might seem innocent, but there are several traits that indicate that they are intended to represent Black people and Asian people, such as the gold chains trait called "hip hop," the gold/diamond grills trait or the Kamikaze headband from fascist Imperial Japan, offensively labeled "sushi chef headband".

Myself and   many  others   have noticed the issues with the images, it is clearly simianization. If you run a Twitter search you can find people have been talking about this since the project started. 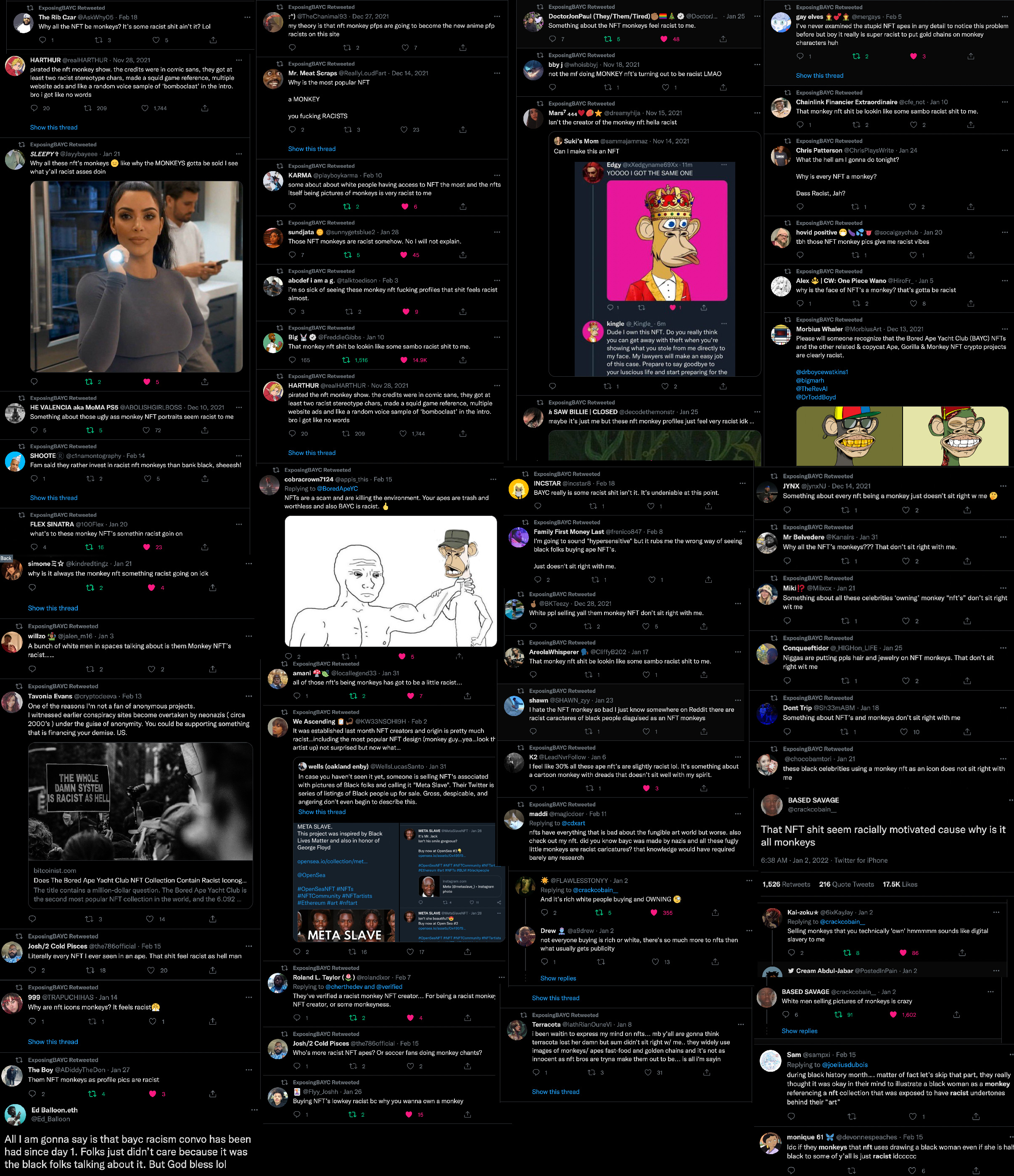 Knowing the history of alt-right/4chan types in crypto, myself and others started looking into it. We found what we believe to be definitive evidence that the group behind the creation of these images are intentionally embedding Nazi dog whistles throughout their project. Here is how we have arrived at this conclusion –

1. The BAYC logo looks very similar to the Nazi Totenkopf emblem, even containing the same amount teeth in the skull, 18, a number the ADL has identified to mean Adolf Hitler. The logos also both have a ragged edge, something very uncommon in other circular emblems.


2. The project was launched by a company called Yuga Labs, the Kali Yuga is a popular element of alt right/traditionalist ideology and Yuga Labs has gone to the effort to embed the traditionalist philosopher's name, René Guénon, who is credited for bringing Kali Yuga into western thought and an alt-right icon,  inside one of their puzzles. Also embedded is the word "macaque", a known racial slur.

3. One of the co-founders goes by Gargamel, a character from the Smurfs who is acknowledged as an antisemetic depiction of a Jewish person, also a common term used on 4chan to discuss Jews. Since I've brought this up, he has gone through the effort to try to hide it. Gargamel's real name is Greg Solano, a writer who wrote his undergraduate thesis on fiction about nazis, and expressed interest in incorporating a character like Hans Reiter (SS officer) into his writing.

4. Another co-founder, Emperor Tomato Ketchup, has the same name as an explicit film from 1971 that features scenes of a boy in a fascist uniform raping an adult bride. The original film is banned in the US and other countries on grounds of child pornography. 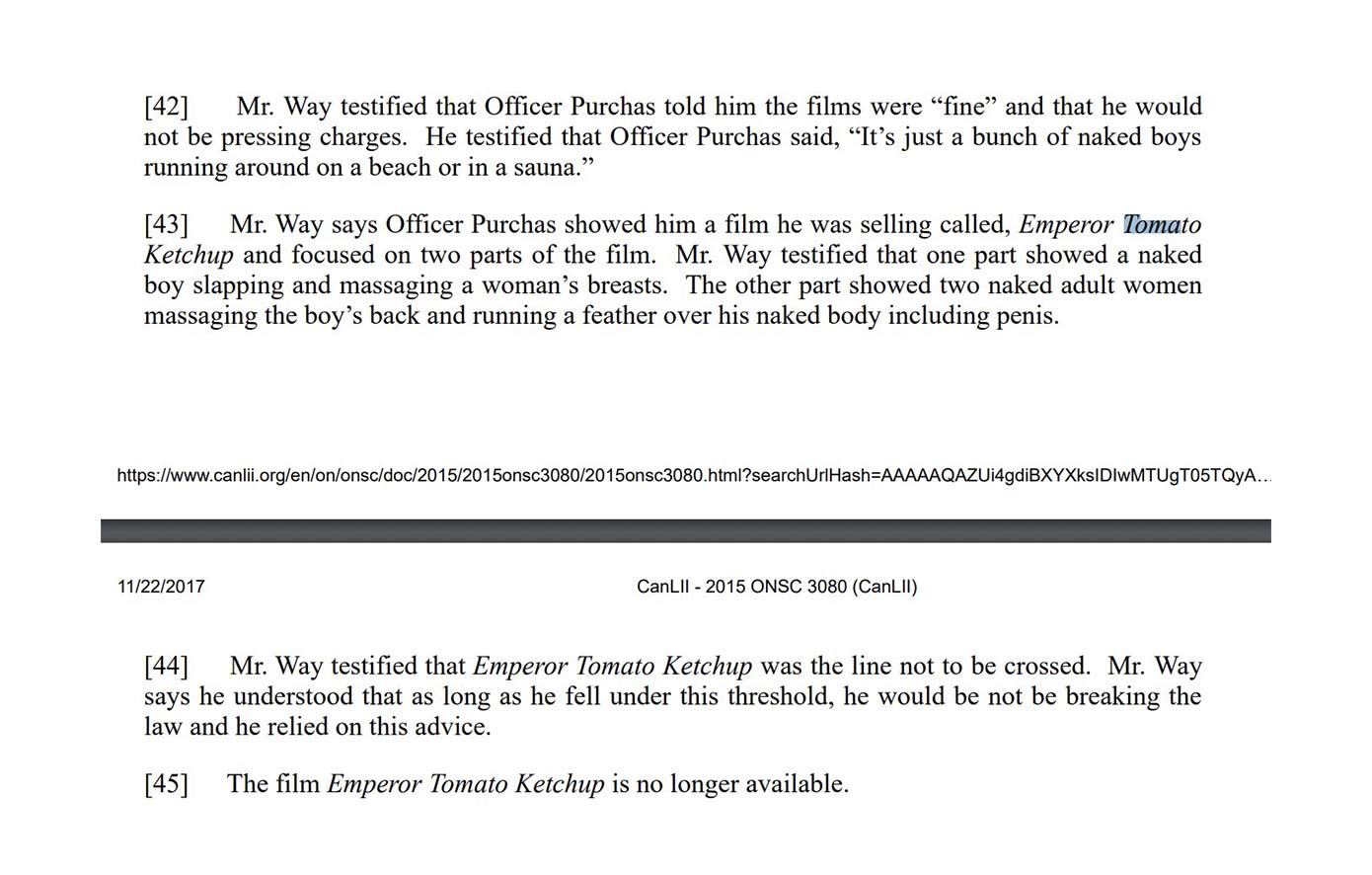 5. Another co-founder goes by Gordon Goner, says he picked the name because it sounds like "Joey Ramone".. being that the group uses anagrams and that it doesn't at all sound like Joey Ramone, maybe this is an anagram. Sure enough its a whole word anagram for, Drongo (Gordon) Negro (Goner), Drongo is common 4chan and Australian slang for stupid, its in the dictionary as such, second definition.. So, his name means "Stupid Negro." Writers often use anagrams for character names and they are also often incorporated within videogames, some of which Yuga Labs have stated they play. Gordon Goners' real name, Wylie Aronow, was disclosed early February, there is barely anything online about him. The one person I could find who knows him says "I have no doubt that they’re cryptofascists". 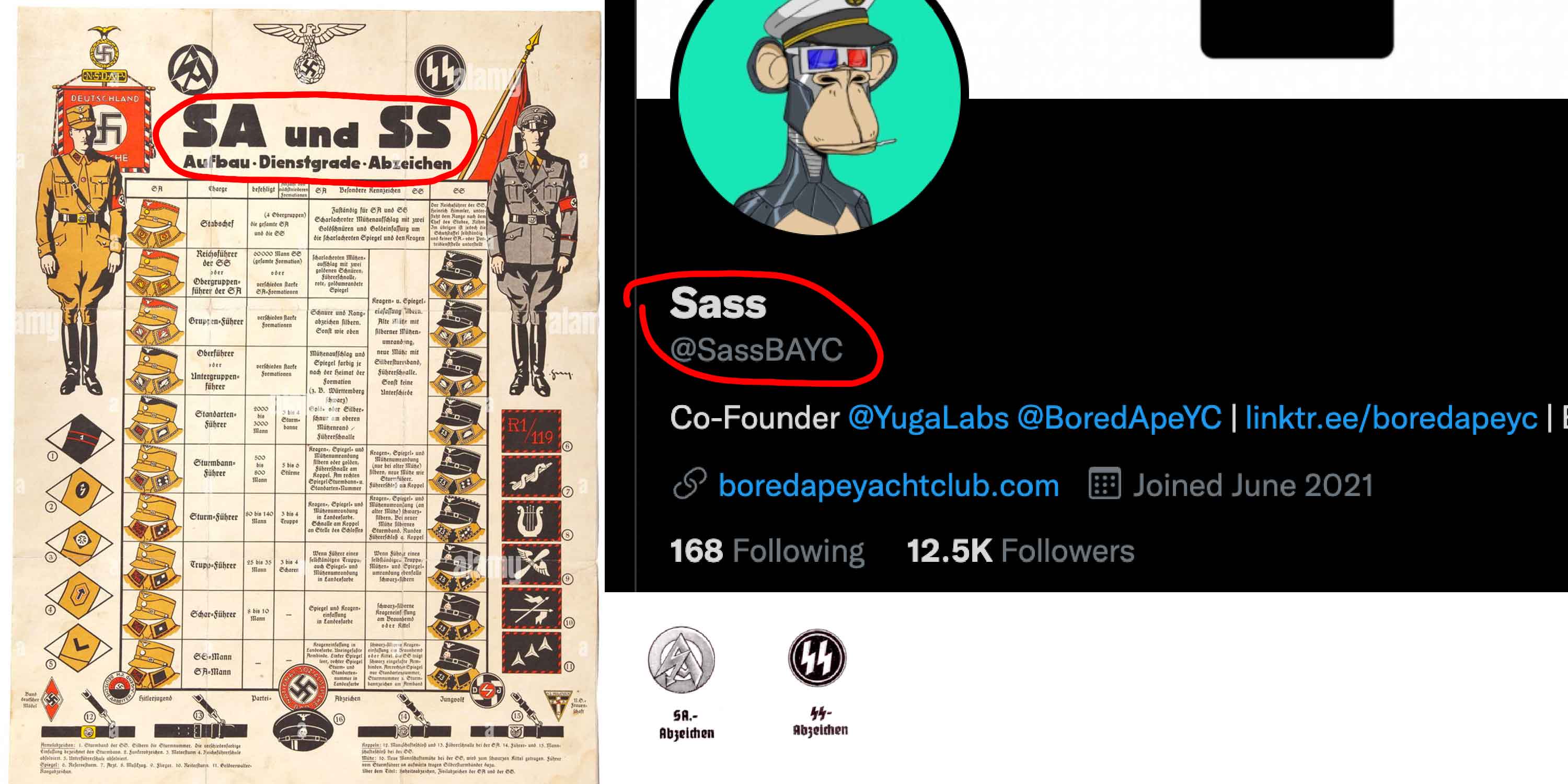 6. The final co-founder goes by SASS – SA or Sturmabteilung was the Nazi Party's original paramilitary wing and SS or Schutzstaffel was the primary paramilitary Nazi wing. So his name, SASS, combines the two primary Nazi military divisions.

7. Their video game as well as Rolling Stone cover features rats with gold, this is a common anti-semitic association. The video game also features bananas arranged to look like swastikas.


8. On Yuga Labs website they state that another NFT series, The Hashmasks, was a great inspiration. The Hashmasks are made by a Swiss company, Suum Cuique Labs, a phrase used by Nazis on the gate of the Buchenwald concentration camp. The phrase was also used on the face of Prussian Helmets that are in the BAYC collection. Yuga Labs is inspired by Suum Cuique Labs to the extent that even their Terms of Service was taken from Suum Cuique Labs. 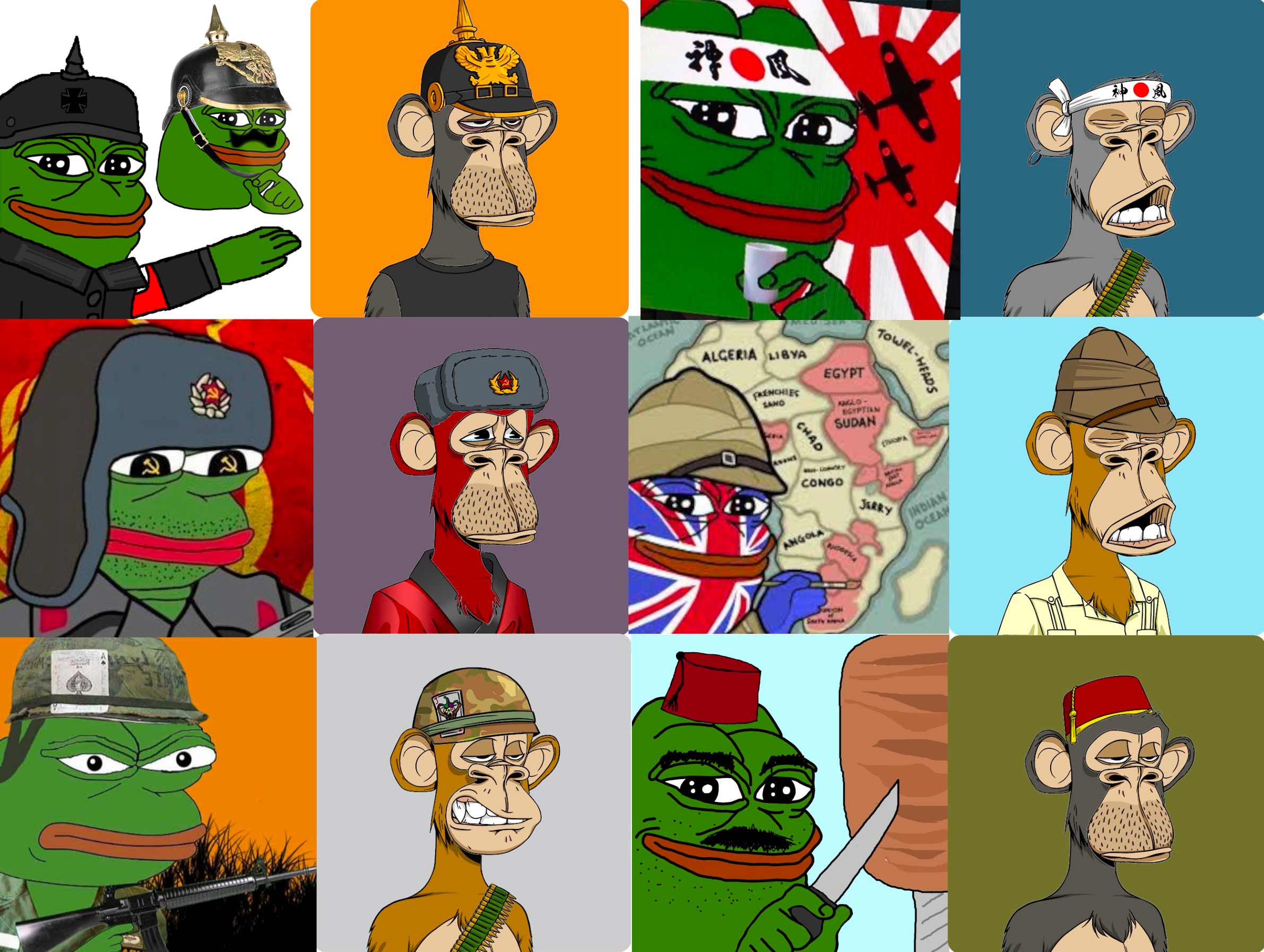 9. The symbols, content and attitude in the images themselves have neo-nazi ideology and war references, such as this "Prussian Helmet". Many of the more specific traits are shared with 4chan pepe memes.


10. In an interview co-founder Gargamel admits that nothing in the collection "is random", that there is hidden encrypted meaning and referenced "iceberg theory". In the same interview, Gargamel cites a Ludwig Wittgenstein quote, “let the unutterable be conveyed unutterably,” seems strange if they are just cartoon apes, no? What are their other meanings? They've yet to explain and seem very evasive. The alt-right is known for this tactic of hidden images and innuendo. See full Gargamel quote:

11. Here is a recent 4chan thread where users are acknowledging this.


12. The Yuga Labs project, "The Otherside", as well as Bored Ape Yacht Club were both officially launched on April 30th, the date Hitler died.


13. The Otherside virtual land plot held by BAYC co-founder Emperor Tomato ketchup, has a character named "Stone Hole Jackson," which is a referance to the Confederate General, "Stonewall Jackson."


Why does it matter? To me it's a terrible example to other creators, setting a bad tone for future generations of art – we have already seen it morph into increasingly racist offshoots. Similar to why you don't teach children to say cuss words. Beyond that, I am personally offended by the Nazi references and find the act of covertly incepting an uninformed audience vile.  There is a true danger in dehumanizing people, equating them to monkeys, it justifies violence and racism according to much research.


What can you do? Spread the word, stand up against BAYC, comment on influencers pages, tell your friends, alert the press. The owners of the apes are not the problem, covertly infiltrating culture with hate to an unaware audience is whats wrong and evil.


The information in this has been gathered by over 10 people, I have dedicated a lot of time to compiling and researching this and as an expert in the field of internet culture, working professionally in media/design and internet culture for 15 years, a B.A. in Media Studies, with many credentials, I, and many others, feel very confident these accusations are founded.


P.S. – This domain name was selected to help with SEO, so when people search the co-founders' name this info comes up. 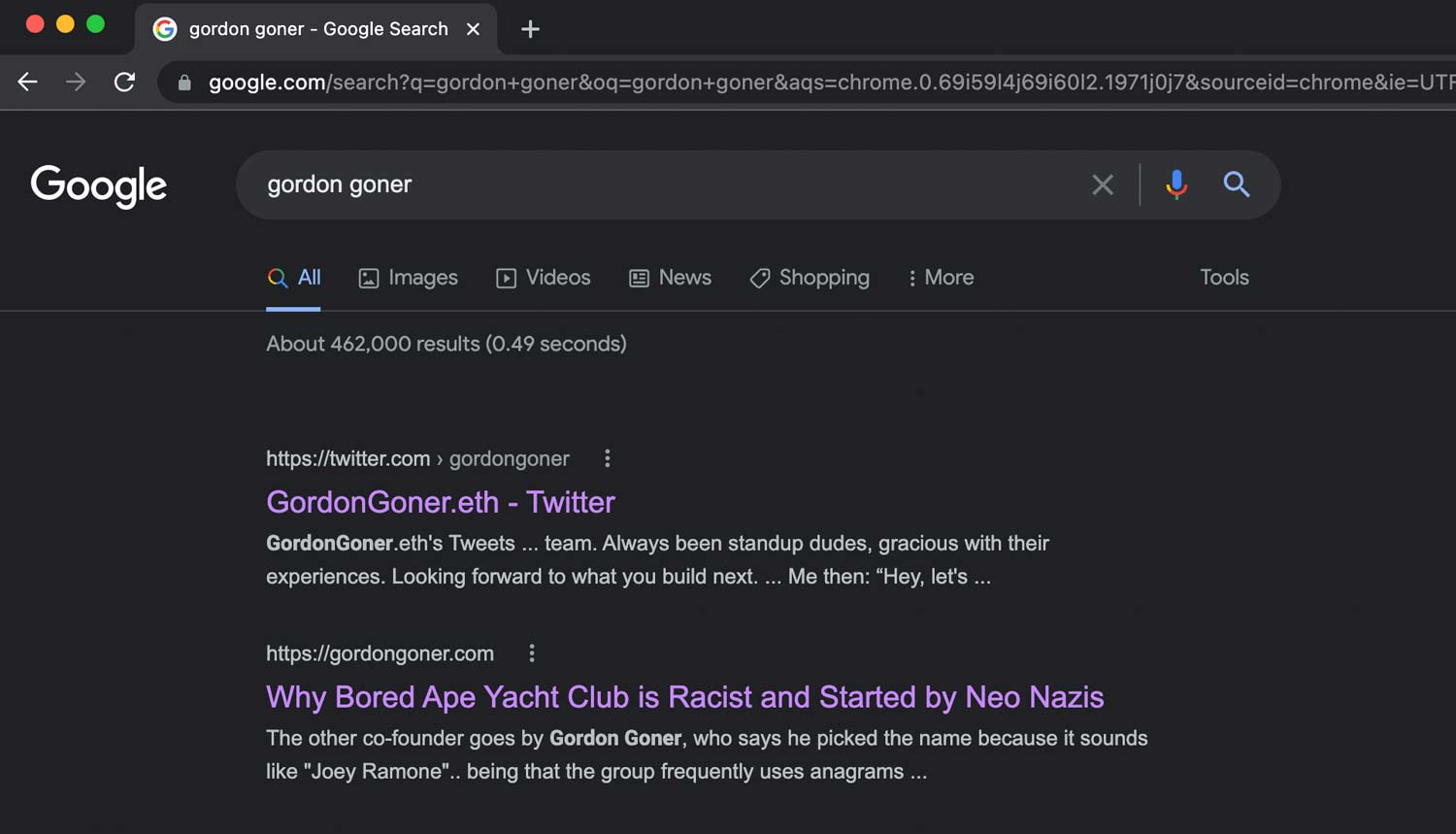 UPDATE: Some of this research has been compiled by YouTube creator, Philion, into a documentary please see here –